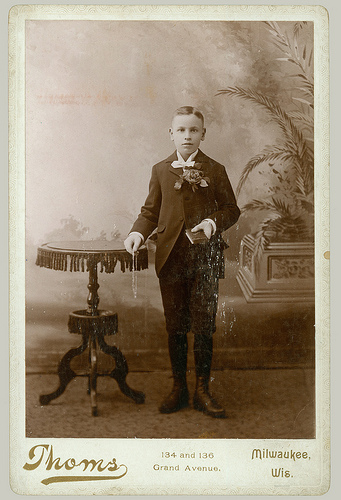 Photographer: Thoms
134 and 136 Grand Avenue
Milwaukee, Wis.
Nothing on reverse


Note that photographer Thoms and J. Brown use the same address at 134 and 136 Grand Avenue, Milwaukee, Wi, but probably not at the same time.


Only one photographer of the cabinet card era with the name Thoms has been found. It was David Thoms of Milwaukee. WI.

Milwaukee, WI, and Grand Rapids, MI, are not far apart. In modern times only about four hours separates them.

Several listings in the Grand Rapids city directory were found for Thoms spanning 1887 to 1895. Then he appears in the Milwaukee directory for four years in a row 1896 to 1899 as photographer at 319 Third Street.

No listings have been found before 1887 or after 1900. Of course Thoms could have opened a studio in Milwaukee for a short duration anytime in his career. He may have even shared it with photographer J. Brown during his stay there from 1885 to 1888.

No biographical information has been found for Thoms.

Although nothing could be found that places Thoms at 134 and 136 Grand Avenue, Milwaukee, WI, as shown on this cabinet card, it can be assumed that it was probably not during the dates shown above. It would have to be either before or after this period unless he maintained two studios in two separate cities at the same time. 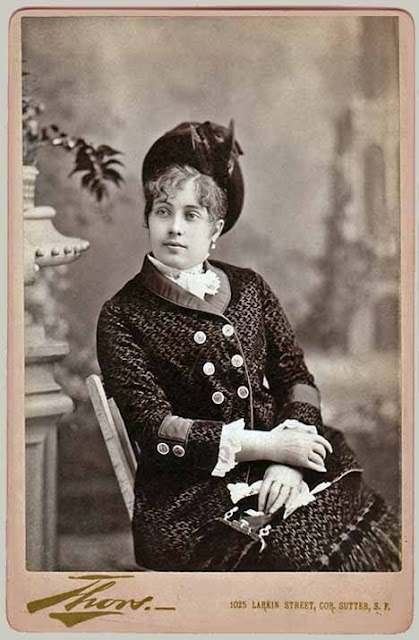 
It was thought at first that this was another example of David Thoms work. But it is not. It is instead, by Louis Thors of San Francisco, CA.