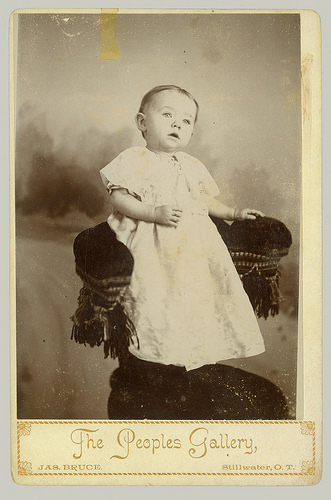 Photographer: The Peoples gallery
Jas Bruce
Stillwater O. T.
Oklahoma became a state 16 Nov 1907. Before that it was called Indian Territory (IT) or Oklahoma Territory (OT).

It is difficult to ascertain whether James R. Bruce was a photographer for a while in Oklahoma Territory and then just disappeared or if he changed his profession to real estate and moved around a lot.

The only document that says he was a photographer is the 1900 US census, which places him in Eden, a township that no longer exists, in Payne County, OK, where Stillwater, OK, is also located. He, his father and mother were all born in Georgia. His birth date is given as Dec 1861.
His wife is shown as Elisa, born in Illinois, her father in Pennsylvania and her mother in New Jersey. Her birth date is Apr 1865.

Matching all of that information with other documents is tentative at best.

By the 1920 US Census we find the best match in Waddel Creek, Moffat County, CO. He is listed as a farmer age 61 (born 1859). He and his parents again are from Georgia. His wife is still Eliece, age 50 (born 1879). She is from Illinois, her father from Germany and her mother from England.

1930 US Census finds him in Douglas County, Oregon. His “age at last birthday” was 69 (born 1860). He and his mother are still from Georgia but his father is now from North Carolina. He is now a real estate agent. His wife is now Eliza N. still from Illinois. Both her mother and father are from Germany now. This time she is 54 (born 1876)

If any of the leads from here on are to be believed, James R. Bruce never returns to the photography business but continues in real estate.

In 1935 there’s another James R. Bruce in the real estate business in Tulsa, Oklahoma, but his wife’s name is Georgia. Probably not a match if we are to believe the Oregon 1938 death registry where his wife’s name is given as Eliza.

And there are others in various employments, in several locations. With a stretch of imagination, about any of them could be the right James Bruce, but it is apparent he was photographer only around 1900.