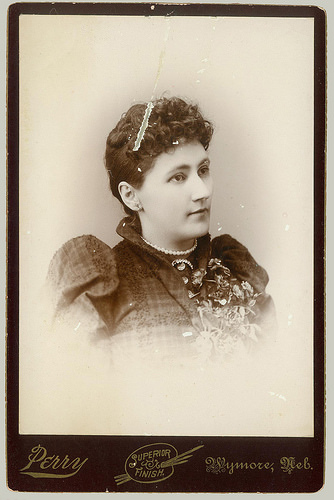 
Oliver H Perry
(Nov 1852 - 18 Aug 1922)
Apparently there were three O. H. Perrys, two of them photographers, in the decades around 1900. The two photographers moved around a bit so keeping them separate was a difficult task.

The O. H. Perry followed here spent some time in or around Wymore, NB. There are big gaps in the documentation but here is where the photographer was on these dates:
1852 Nov
born in New York state, most likely Edinburg, Saratoga County
1859 - 1860
Edinburg, Saratoga, NY: Both parents die

There is a gap documenting his location here as he probably lived with relatives or was in a foster home.

He moved back and forth between Beatrice and Wymore from 1893 to 1910. The two towns are very small and only about 10 miles apart.

The cabinet card here could have been done any time between 1883 and 1910. Darker color mounting boards were more popular around 1900.

The following article says he was born in Ohio but no evidence has been found to support that.