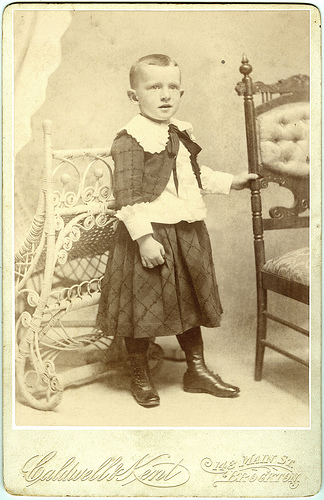 Warren Hindreth Caldwell (1849-1930) was in the Boot and Shoe trade according to the 1900 US Census. It must have been a minor sideline however as he is listed in every Brockton City Directory from 1882 to 1913 as operating a Photograph Studio at 143 main in Brockton. In 1915 he was listed as an artist and in 1929 as a picture framer.

Apparently W. H. Caldwell and I. A. Kent were photograph studio associates or partners at 143 main, Brockton, Massachusetts up until 1895 when Kent moved down the street to 57 Main and began a separate photography studio.

The 1910 Brockton City directory shows him still in business as a photographer at the same address. By 1920 he had given up the photography business and moved to St. Louis to be a paper box salesman. 1930 finds him still in St. Louis but now in real estate. At 74, in 1940 he is working as a cashier. He apparently never returned to photography after 1910. There were no records of his death.

There were no records showing what the A. I. stood for.