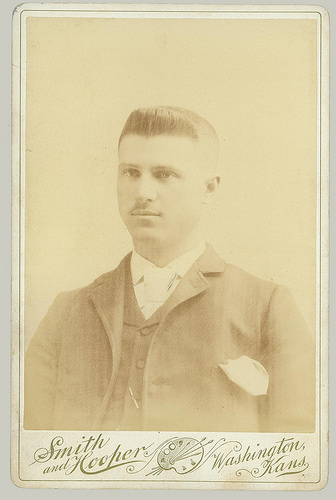 W H Smith was a rather popular name around the northeast quarter of Kansas in the 19th century. Attorney, seed dealer, politician, cattleman, postmaster, sheriff and many other occupations were found. These may have been all one person or several. No connections have been made.

According to a Kansas tax roll, at least one of them was a photographer for a short time in Pardee, KS. Pardee, KS, became a ghost town about 1905, so unfortunately there is little information about the place.

What can be established is from two small advertisements in the Columbus (KS) weekly, 5 March 1885 and 12 March at the Southeast Corner of the Square. By April of the same year, the corner had been taken by D C Bacon, photographer. No earlier ads were found.


There were at least, two men named William H Smith in the right area and about the right time. Around the turn of the century, they both lived in the same town, Chanute, KS. One was a clerk for a drug company and the other was the husband of Mary Elizabeth Mater-Smith, photographer at Chanute, KS. Chanute is about 70 Miles from Columbus, KS. Chanute however is about 150 miles from Pardee, KS, where the tax roll says a William H Smith, photographer was working in 1865.

So no conclusions can be drawn about who the W H Smith was on the Kansas tax roll.

He was probably NOT the Smith in the partnership of Smith and Hooper.

But there were at least NINE photographers named Smith that could POSSIBLY have been in Washington, KS, for a brief stay, between the years of 1892 and 1909. This is a list:

The photographer Smith, of Hooper and Smith, could be any one or none of these. In order to determine which, if any, of these photographers was possibly the one associated with Henry T Hooper in Washington, KS, a timeline or biography for each was developed.


The research above indicates that William H Smith was probably NOT the photographer in partnership with H T Hooper in Washington, KS.


After investigating all of the Smith photographers in this list, Rodrigo Gilbert Smith appears to be the photographer that was partners with
Henry T Hooper in Washington, KS,
around 1891.