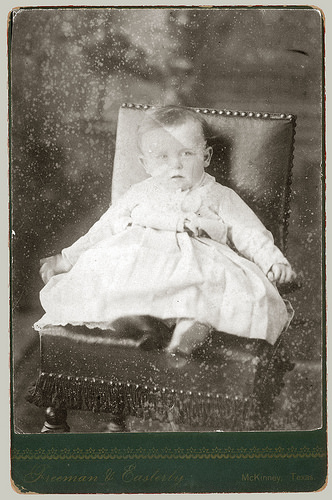 
Who was the Easterly of “Freeman and Easterly” the photographers credited on this cabinet card example?

Nor is it Albert N Easterly who plied the photography trade around 1884 and 1885 in Mechanicsville, Iowa. No record has been found that he ever left Iowa.

The strongest possibility would be George Bascomb Easterly who grew up in Virginia and then established a photography business in Lake, California. He died there in 1906. Records place him in Virginia in 1880 and then in California in 1896. Nothing has been found to place him in McKinney, Texas, but he certainly could have been just passing through there around 1887. It was not unusual for a young man to be “working his way west” in those years.


There were various other Easterly’s in the US at the right time, a farmer, a fireman, a stone cutter, a prospector, a burglar and the reverend George Easterly. None were found in Texas. In the right time frame, only two other people by the name Easterly are found in Texas: Daniel James Easterly and his wife Texanna. However, no records have been found connecting them to photography or art.

It looks very much like the Easterly part of “Freeman and Easterly” was in the photography business in Texas for only a short time, apparently around 1887. He was not there long enough to be established in a city directory, enumerated in a census or make the newspapers.

And it’s not so unusual for an established photographer to take on an apprentice and set him up as a partner, in lieu of actual salary. Many of the more aggressive business people in the photography dodge, such as Alfred Freeman, took on assistants and novices hoping to cultivate a partner who could profitably operate a studio in one place while another studio was opened elsewhere.


Information written on the reverse indicates this card was finished in 1885 or 1886. 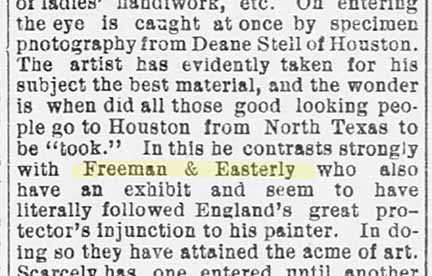 Email ThisBlogThis!Share to TwitterShare to FacebookShare to Pinterest
Labels: Easterly