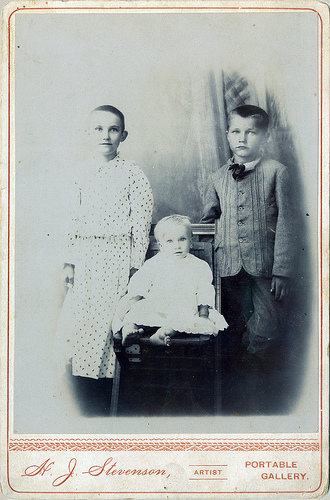 1864
born in Ohio
1878 - 1895
works up and down the US west coast as miner, farmer and cowboy.
1895
living in Denver, CO, and moves to Oklahoma City, OK; opens a photograph gallery on Broadway between Grand and Main Streets. It was called “The Stevenson’s Art Gallery”
1896 May 01
moves to El Reno, OK; works for photographer named Wallace, eventually buying the studio which was located in the 200 block of Bickford Ave El Reno, OK
1900
(US Census) as photographer; res: 419 Choctaw, El Reno, OK
1909
(city directory) as photo supplies at 119 s Bickford, El Reno, OK
1910
as photographer at 430 n Edwards, El Reno, OK
1913
sells 150 Indian photographs to Oklahoma State Historical Society

All information is from US Census and city directories. Also helpful was a 10 page document dated 18 Mar 1938, called the Works Progress Administration Indian-Pioneer History Project for Oklahoma. This biography outlines the life of H. J. Stevenson including many details not found anywhere else.

This cabinet card was probably finished around 1920, when Stevenson referred to his business as the “Traveling Shop”.