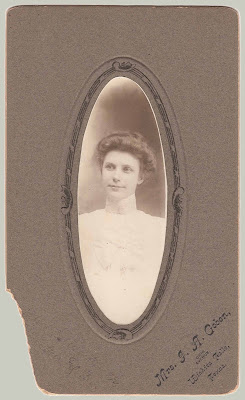 Jodie Ann Walker was the first of three wives of Edgar L Goben. Goben and Jodi Walker were married for only a few years. Married in 1889, by the 1900 US census, Jodi is listed as divorced.

Although during her lifetime, found in over 40 documents, census and city directory, she is never credited as a photographer. Then, finally, on her death certificate, she is shown as “retired photographer”. It would seem, although the example photograph here is dated 1902 on the reverse, Jodi Goben might have carried on in the photographic business as a second occupation while operating boarding houses or rooming houses until about her 70’s.

Note that although the 1900 and 1910 US census describes her as “divorced” she seems to prefer “widowed” in most other census and city directory listings.