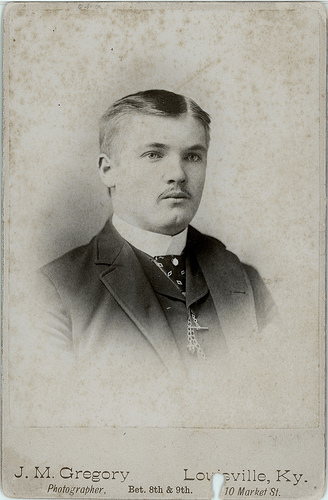 
John M. Gregory was found in lots of Louisville, KY, city directory listings. Connecting sparce biographical information to this timeline was difficult. Exactly where he was born and where he grew up was still not certain. And unfortunately, there were other men named J M Gregory, John Gregory and Johnson Gregory living in the same area making research on the photographer more difficult.

In the 1880 US Census there was a photographer at 105 4th street in Louisville, KY, but the enumerator had incorrectly listed his name as “James” Gregory.

Here is a timeline including street addresses which may aid in dating some cabinet cards. There are some, thus far, unexplained absences. Did he locate in a different city? Was he ill? When he returns to business in Louisville from these absences, he is at a new address.

Note also that in all city directory mentions, he is apparently living and working at the same address.

The cabinet card at the left must have been done between 1886 and 1893 when he was at 810 Market Street in Louisville, KY.

August 6, 2019 UPDATE! Thanks to an alert comment from Vernon Purvis (see comment section) this obituary has been added. It explains a few things. This prompted a complete rewrite of the timeline above.