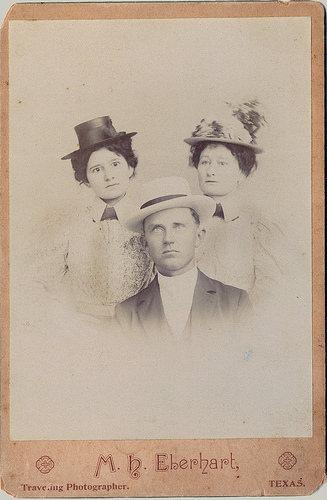 M. H. Eberhart was 30 years older than most of the other cabinet card era photographers.

M. H. Eberhart’s son Ira A. Eberhart (1859-1953) is listed as “photographer” in the 1880 US Census and the 1885 Iowa Census but beginning with the 1900 US Census, his profession is shown as physician for the rest of his life. Early on, he was probably only assisting his father.

According to many records M. H. Eberhart lived in Pennsylvania, Illinois and Iowa. The only challenge left is to calculate when he was in Texas for the photograph at the left. And, when was he there long enough to have cabinet card blanks printed with “Texas” in the lower right corner.

Oddly, he is not picked up in any city directory and only one Iowa Gazetteer. This could mean possibly that his residence was always outside of the city limits. No newspaper items or advertisements were found.


If more information turns up, it will be added here.