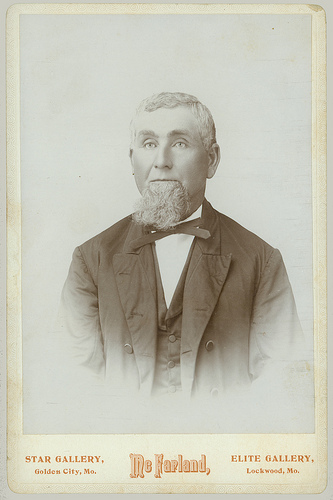 
There were at least three photographers named McFarland in the cabinet card era. It may not be possible to pinpoint the one who had studios in Golden City and Lockwood, MO.

Golden City and Lockwood are both very small towns now, back in late 1800, they would have been even smaller. Even combined they would not have a population large enough to give a photographer a sustained income.

A photographer and camera could relocate easily and quickly. One could work out of Joplin or Springfield, MO, or most probably Pittsburg, KS and take in a number of small towns in the area by train or wagon. All three cities are within a 50 mile radius of Golden City and Lockwood.

There were many "Elite" and "Star" galleries in the cabinet card era.