This is a special page for a cabinet card by a very interesting photographer from the collection of rfinch on Ancestry.com 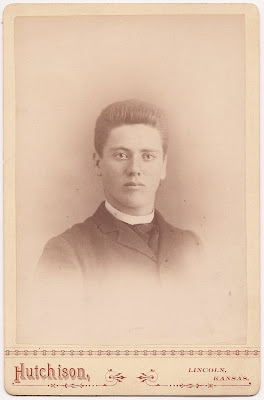 Photographer: Hutchison, Lincoln, Kansas
from the collection of
rfinch on Ancestry.com


There are no Lincoln, KS, city directories available so the timeline is a bit sketchy. It shows that G E Hutchison was in Lincoln, KS, from about 1890 until his death in 1949. Photography is mentioned only twice, 1895 and 1900. By 1910 it looks as if he has retired from photography and never returns.

The following two items clear things up a bit. These are from GenWeb: Photography Studios in Lincoln County
transcribed from the Lincoln Sentinel-Republican, March 14, 1935
HEAD: Photo Gallery Here Since '88 Will Be Abandoned April 1
“G.W. Phegley, photographer in Lincoln the past 24 years, is planning to move his studio from its present quarters over the Model Cash Grocery to the building now occupied by the Allen Plumbing company. Mr. Phegley purchased the plumbing building some time ago and plans to make it into one of the finest photograph studios in central Kansas. It will make him an ideal location, easily accessible and with splendid natural light.


The rooms being vacated by Mr. Phegley have been used as a photograph studio since 1888, when the first "gallery" was opened in Lincoln by G.E. Hutchison, now bonded abstractor. For 19 years, Mr. Hutchison was busy taking pictures of Lincoln residents, For in those days it was considered the proper procedure to have a picture made of the flowers banked against the casket.
After 19 years in the business, Mr. Hutchison was nominated and elected to the county office of Register of Deeds and sold his photograph equipment and supplies to James Shipley.”

Continued in next row

And this:
“George Hutchison opened a studio in Lincoln in 1888, immediately after his marriage, and remained in the photography business until 1906, when he was elected Register of Deeds. He worked at a variety of professions after his term expired but apparently never returned to photography. He died in 1949.”

So, in summary, G E Hutchison was in Lincoln, KS, from about 1888 until his death in 1949. Photography is mentioned only two actual records, 1895 and 1900. By 1906 it looks as if he has retired from photography and never returns


The Kansas newspapers have lots of items about George Hutchison, unfortunately there was at least three men by that name in Kansas around the last half of the 19th century. Besides our photographer, there was another in politics and another was a petit criminal, so they made the papers often.

Following are two minor items that are fairly certain to be about the photographer Hutchison. 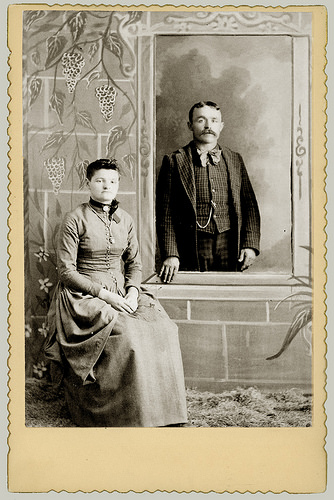 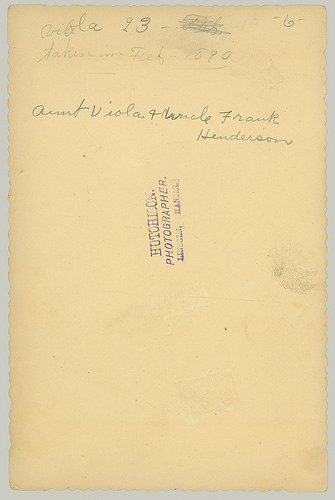 Here is an additional cabinet card by photographer George Hutchison from the LOST GALLERY collection.
This photograph is dated on the reverse by a family historian: Feb 1890.