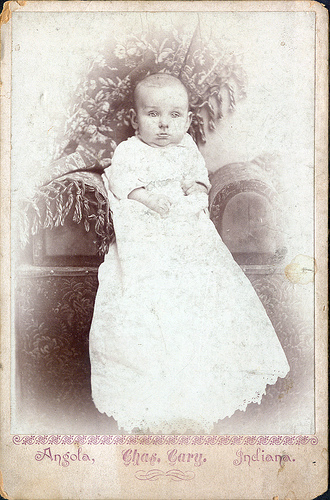 
Charles Cary (22 Aug 1859 - 26 May 1924) has a long and full biography with family in Angola, Steuben, Indiana. There doesn’t seem to be two people with exactly the same name at the same period, in the small town of Angola, Indiana either. There is however only one remote mention of this Charles Cary being a photographer. He was many things over his life, including in 1870 a blacksmith, in 1910 a car Salesman and in 1920, Repair shop/vulcanizer. In 1907 he is mentioned in a news item that he is installing a gasoline engine in Hamilton, Indiana, News Office. Only once in the Angola Gazetteer of 1897, is he mentioned as a photographer, no details.

It is a possibility that Charles Cary worked as a part time photographer during some of his other occupations but it is more likely he was a photographer only around 1897.