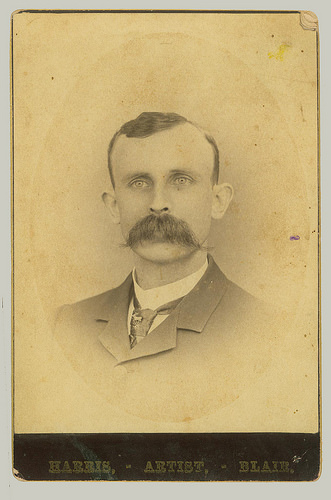 
The whereabouts of Charles Harris before 1880 are pretty sketchy. He was born in New York but there is no record of when he left there. There is some evidence that he was enlisted with the Union army in the US civil war, 1861- 1865.


Also there is an imprint on a cabinet card mentioned on an Ancestry message board, "From C. H. Harris's Gallery, west of O. V. Palmer & Co.'s Store, Blair Nebraska". According to Andreas' History of Nebraska, O V Palmer’s store was in operation in Blair, NE, from 1874 to 1881.

Apparently, Charles Henry Harris was in Omaha, NE, for only a very short time. The 1880 US census lists him as photographer that year. The Omaha, NE, city directories for the years before and after do not include a listing for him. In 1891, eleven years later, he is married in Henry, IL. His daughter Eva was born in Rock Island, IL, Aug 1897

Except for a couple years in Houston, TX, he spends the rest of his life in Davenport, IA. He worked mostly as a photographer but also was a real estate agent in 1910 and an elevator operator in 1915.