06 Dec 2017
Thanks to an email from a fellow researcher, this page was updated and corrected.


21 Apr 2018
Thanks to a comment on Ancestry.com from member jbefrva1, this page has again been updated to include new information. 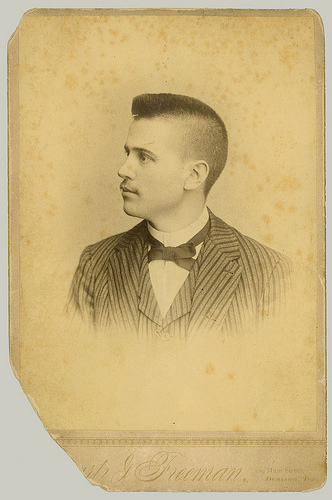 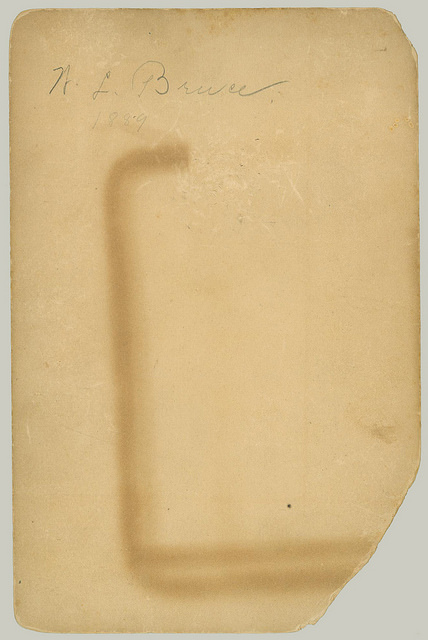 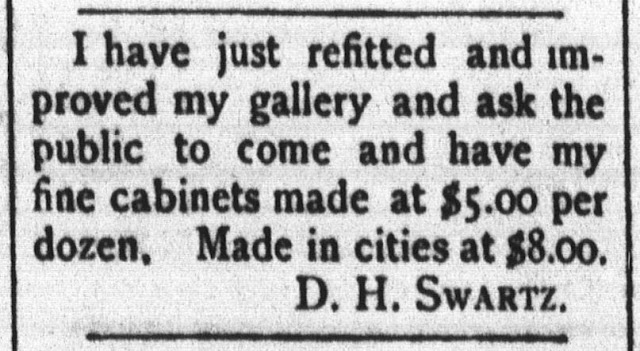 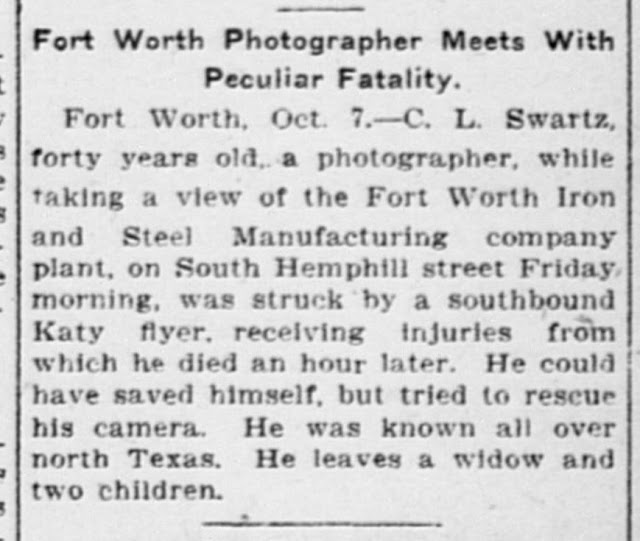 From jbefrva1 on Ancestry.com:
He (Charles) was buried in an unmarked grave at the Historic Oakwood Cemetery in Fort Worth. The memorial shown in the picture was donated and dedicated May 10th, 2013 in connection with a Swartz Brothers photograph exhibit in the Forth Worth Library in connection with "Swartz Bros Week". Charles wife and children were in Shenandoah County, Virginia visiting relatives at the time of his death and never went back to Texas. His wife was committed to a State Mental Institution where, it is believed, she died. The children went to live with relatives.


1910 Sep 23
Wise county (TX) Messenger news/ad about John Swartz Studio
1910
US Census John has moved his studio to 1114 Billinger in Fort Worth, TX
1916-1918
Fort Worth, TX, city directory John moves studio to 503 ½ Main
1918
Fort Worth, TX, city directory David Swartz has no personal listing but his company “Doctor Swartz Chemical Company” continues in the directory
1918 Nov 25
Dayton, OH, Woodland Cemetery data base seems David Swartz, born in Virginia returned to Dayton, OH, and died there
1930
US census John has moved back to Virginia and is working on the farm
1937
John dies in Manassas, VA, at age 78

(Continued in the next row)

Charles Lee Swartz, the youngest of the three brothers, worked mostly for brother John Swartz in Fort Worth as a “View” artist. Views are photographs taken of various points of general interest, such as buildings or bridges.

He was killed by a train in 1905 while trying to rescue a camera from the path of the train. An article about that event in the Denison newspaper says he was partners with G. C. Freeman “28 years ago”. This is probably not accurate as there is no other information to support that idea and also, he would have been only 13 years old in 1877 and G. C. Freeman did not arrive in Denison, TX, until after 1880.

David Swartz was partnered with G. C. Freeman between 1882 and 1884 living and working in several smaller towns in Texas, such as San Marcos, Brenham, Columbus and Denison. It is the Superman/Clark Kent situation when David H. Swartz the photographer disappears and David H. Swartz the chemist appears. While living in Dayton, OH, at 36 Washington st, between 1902 and 1903 city directories show he abruptly changed professions from photographer to “chemist”. He then returns to Fort Worth


without his wife and son to open his new business, “Doctor Swartz Chemical Company” and remains there until his death in 1918. His death date is determined when his company is listed in the Fort Worth city directory but he has no personal listing.

There is also an entry in the Dayton, OH, Woodland Cemetery data base for David H. Swartz, born in Virginia, who died 25 Nov 1918. Did David return to Ohio just before he died? No other information has been found on his death.

John Swartz was partnered with G. C. Freeman between 1888 and 1893, situated mostly in Denison, TX. He sold out his partnership to Freeman and left Denison to live and work in Fort Worth, TX.

In 1900 John Swarz photographs, in his studio, five gentlemen who are later discovered to be “The Wild Bunch” including Butch Cassidy and the Sundance Kid.

John remained in Fort Worth as photographer until 1930 when the US census finds him back in Virginia. He dies in 1937 at age 78.


Although Freeman was partnered with David Swartz as early as 1882 in Columbus, TX, they worked neighboring towns such as San Marcos, Temple and Brenham. There is little evidence they ever worked in Denison, which is where John Swartz was apparently living. In February, 1884, David sells out (probably to Freeman) and moves to Fort Worth, TX.

The cabinet card here was probably finished in or around 1889 when Freeman and John Swartz advertised repeatedly in the Dennison (TX) Gazetteer. In 1893 John Swartz sells out his studio in Denison, TX, and also moves to Fort Worth. Gamaliel Freeman has already left photography and in 1894 he is working with the YMCA. 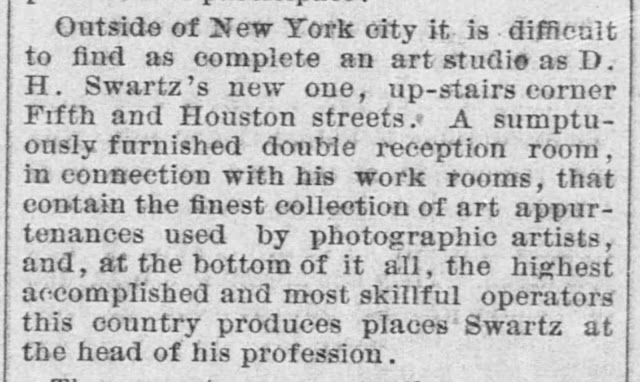 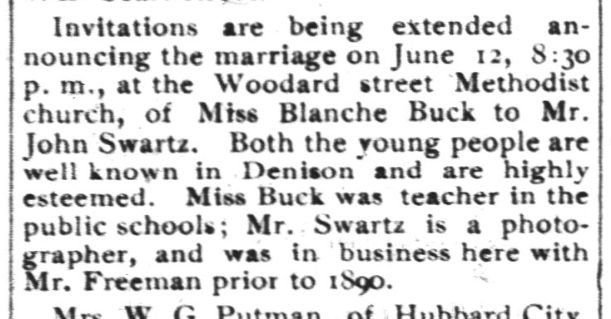 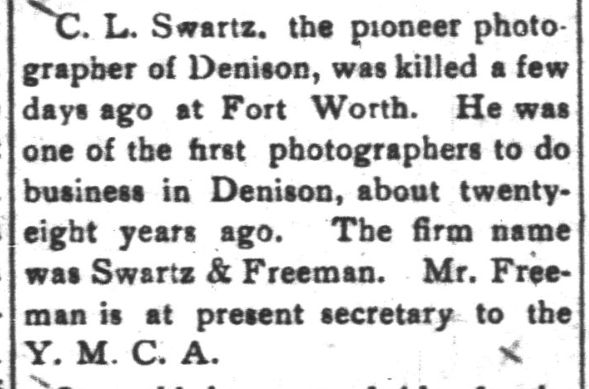 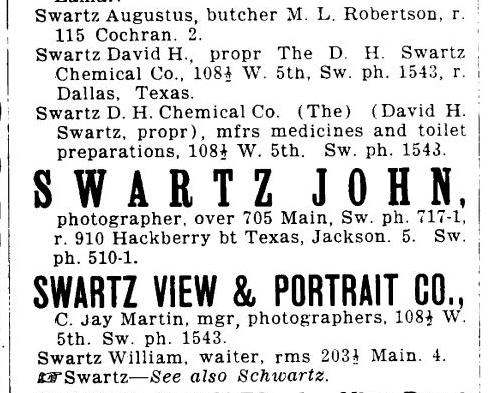 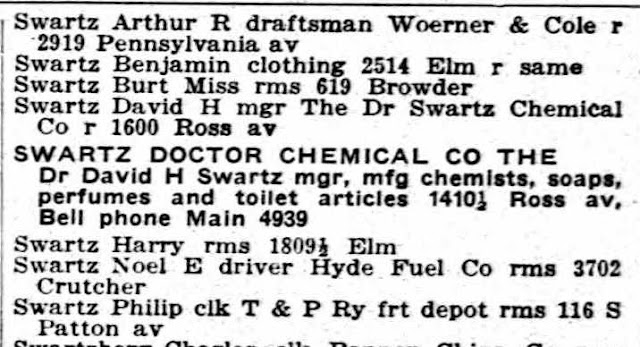 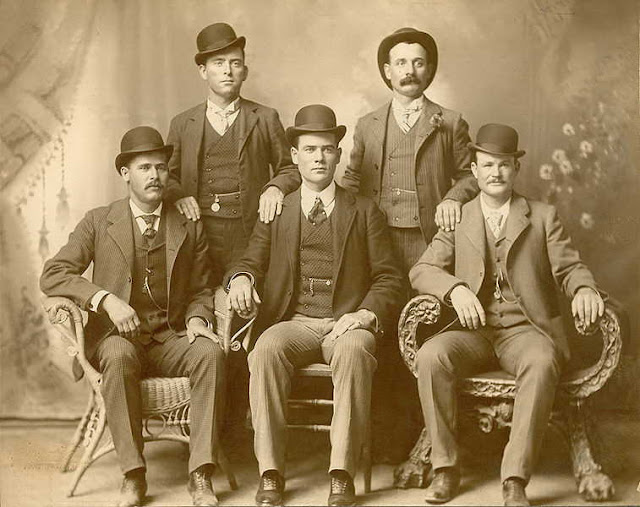 The Metropolitan Museum of Art feels that this tintype is a picture of "The Wild Bunch" taken by an "Unknown" photographer. Well, is it?

Is this actually the photograph taken by John Swartz? Could be! Is this ANOTHER photograph of the Wild Bunch? That could be too! Is this just another photograph of five buddies out on a day's lark? That is possible too. 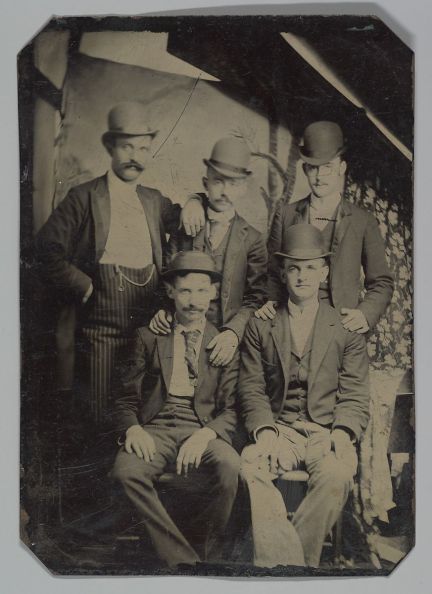 example from the Metropolitan Museum of Art


Following is from the website of
the Metropolitan Museum of Art

The Wild Bunch was the largest and most notorious band of outlaws in the American West. Led by two gunmen better known by their aliases, Butch Cassidy (Robert LeRoy Parker) and Kid Curry (Harvey Logan), the Wild Bunch was an informal trust of thieves and rustlers that preyed upon stagecoaches, small banks, and especially railroads from the late 1880s to the first decade of the twentieth century.
This crudely constructed tintype portrait of five members of the gang dressed in bowler hats and city clothes shows, clockwise, from the top left, Kid Curry, Bill McCarty, Bill (Tod) Carver, Ben Kilpatrick, and Tom O'Day. Without their six shooters and cowboy hats the outlaws appear quite civilized and could easily be mistaken for the sheriffs and Pinkerton agents who pursued them in a "Wild West" already much tamed by the probable date of this photograph. Gone was the open range--instead, homesteads and farms


dotted the landscape and barbed-wire fences frustrated the cattleman's drive to market. Gone too was the anonymity associated with distance, as the camera and the telegraph conspired to identify criminals. Bank and train robbery were still lucrative, but the outlaw's chances for escape gradually shifted in favor of the sheriff's chances for arrest and conviction.

By 1903 the Wild Bunch had disbanded. A few members of the gang followed Butch Cassidy to South America, while the majority remained in the West, trying to avoid capture. McCarty was shot dead in 1893, in a street in Delta, Colorado, after a bank robbery; Carver died in prison; Kilpatrick was killed during a train robbery in 1912; Tom O'Day was captured by a Casper, Wyoming, sheriff in 1903; and Kid Curry died either by his own hand in Parachute, Colorado, in 1904, or, as legend has it, lived until he was killed by a wild mule in South America in 1909.
The photograph comes from the collection of Camillus S. Fly, a pioneer photographer in Tombstone, Arizona, in the 1880s and sheriff of Cochise County in the 1890s.


A bit of research was added here in response to this comment from hello863.
"I recently found some old pictures taken in the 1800's (I think) by D.H. Swartz and A.N. Callaway in Brenham, Texas. Any info
about either would be appreciated. Thank you."

Alonzo Newell Callaway can be documented in Brenham, TX, 1878-1879 and 1882-1883. (Callaway was probably in Brenham in 1880 and 1881, but no documentation has been found.) The Brenham Weekly Banner newspaper shows Callaway opened his gallery in June of 1878. According to the Brenham Weekly Banner, 23 March 1882, Callaway had sold out to J F Sprain. By 1885 Callaway was living in San Antonio, TX, and apparently never left. (See examples below) D H Swartz moved around a lot as seen in the timeline at the top of the page.

Best guess would be that Calloway and Swartz might have partnered up briefly around 1879 to 1880. 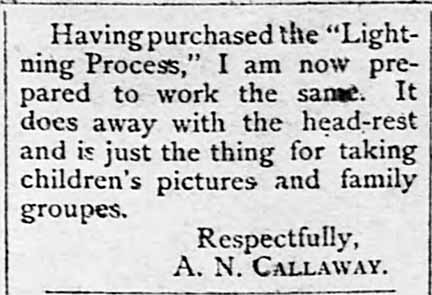 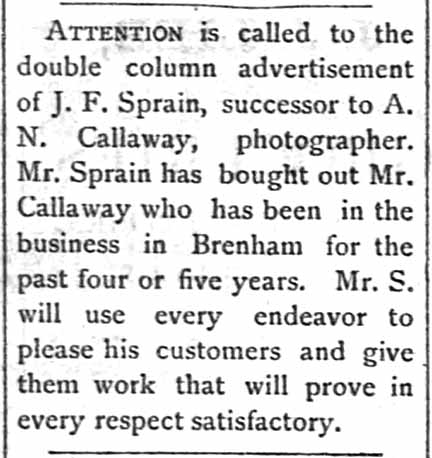 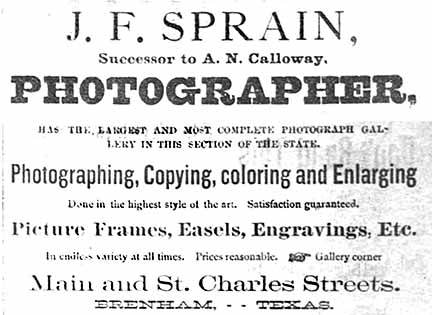 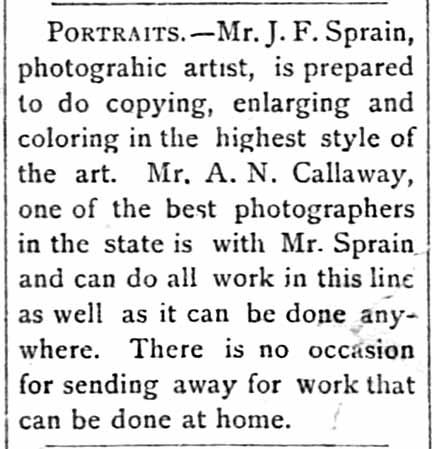 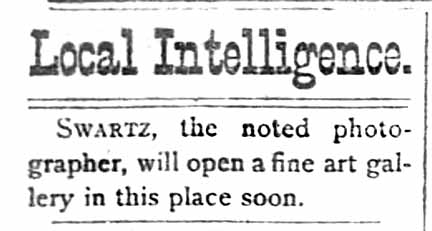 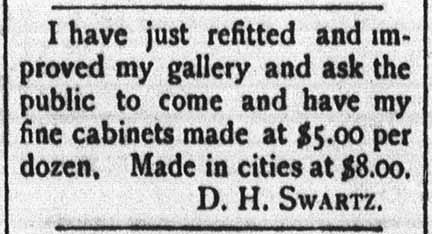 If anything further turns up on Swartz, Freeman or Callaway it will be added here. 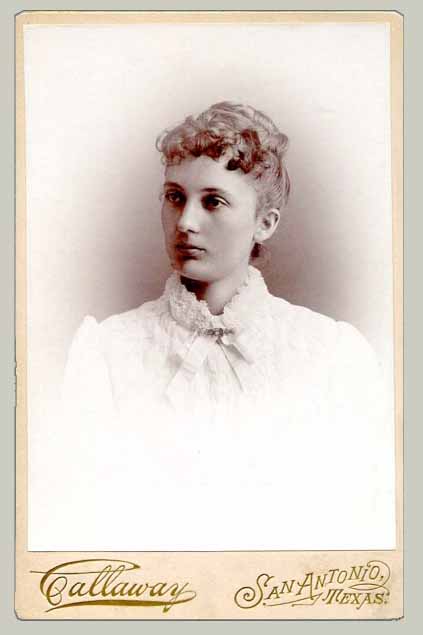 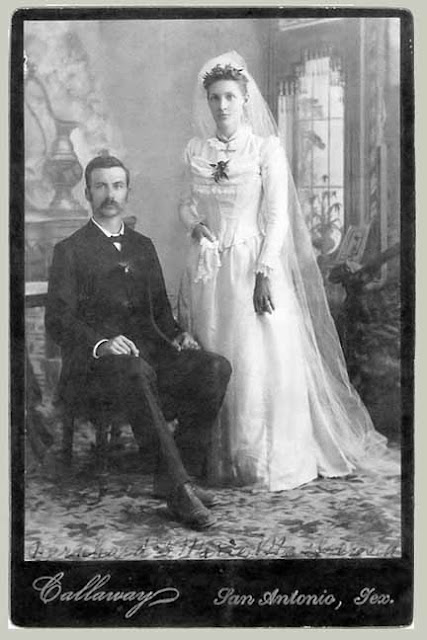 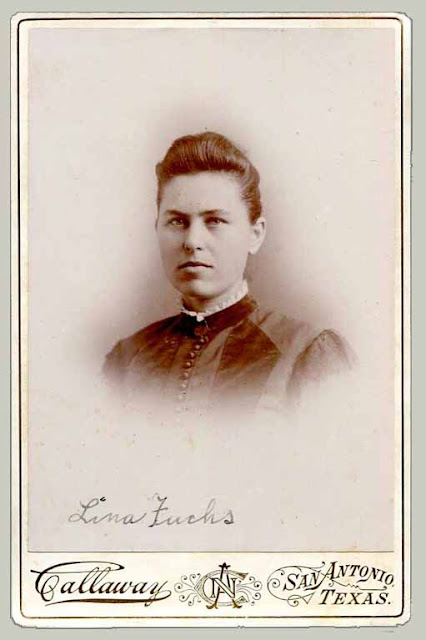 some additional items by Swartz 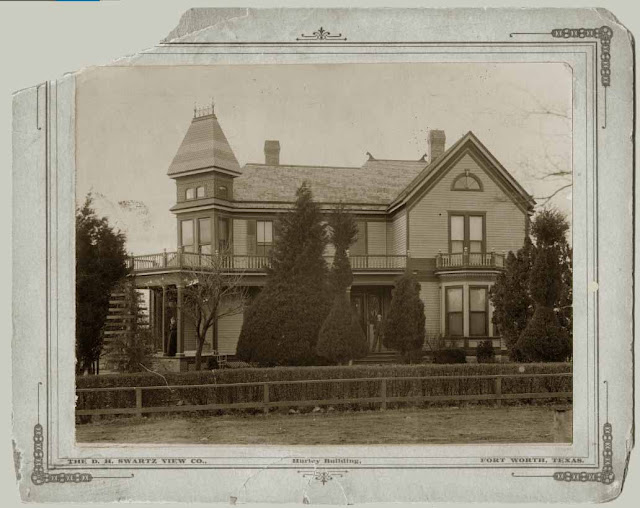 example from University of Texas at Arlington Library 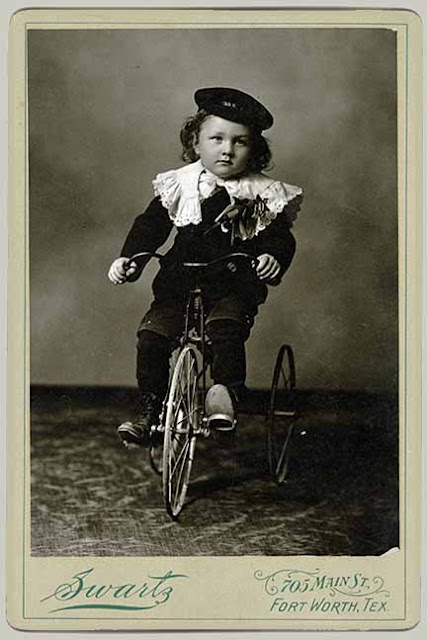 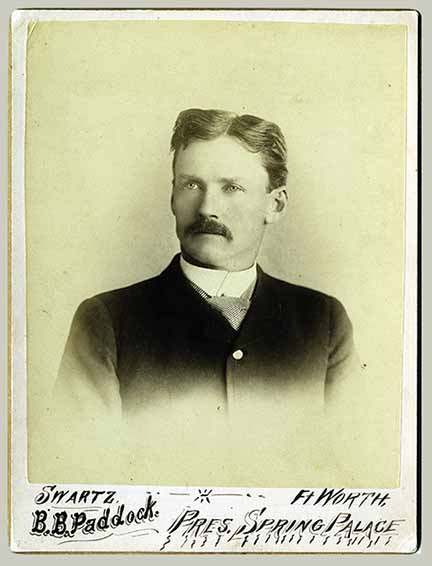 photographer: Swartz
705 Main, Fort Worth, TX
example from UTA library
(This is not exactly a cabinet card.) 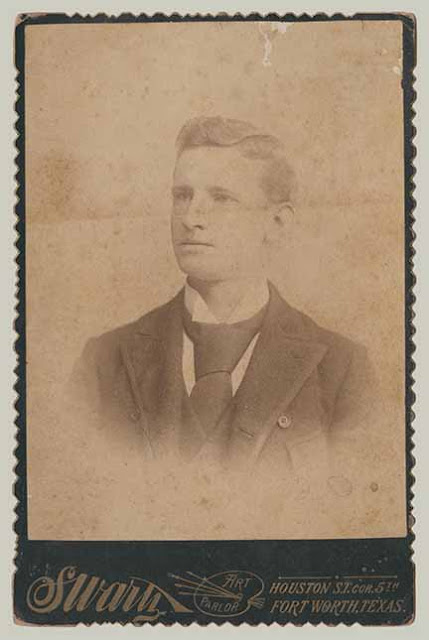 photographer: Swartz
Houston Street, cor of 5th, Fort Worth, TX
example from Portal to Texas History
Probably from after 1916-1918 (see text above)