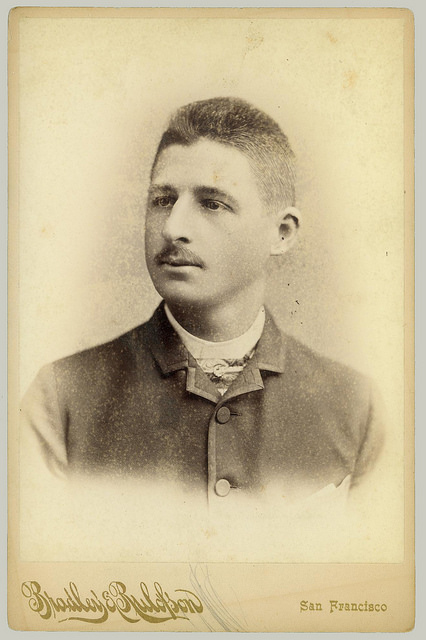 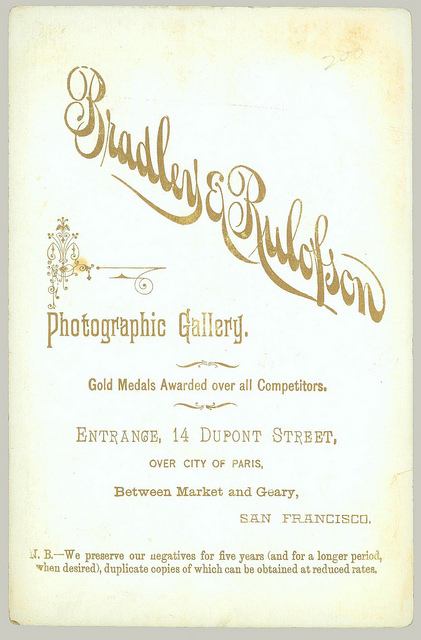 
There are extensive and detailed biographies available on line describing the lives of Henry William Bradley and William Herman Rulofson. LOST GALLERY will concentrate here on a timeline of events to locate where they worked and when. Again, not all the accountings of the lives of these two men agree. There are some minor differences in dates and events. The following timeline combines the best version available.

During their studio days Bradley and Rulofson photographed hundreds of celebrities and notable Californians. These included such people as Bret Hart, Susan B Anthony, Queen Emma of Hawaii and Emperor Joshua A Norton.

- continued in next row -

1850 Feb
Bradley leaves North Carolina and opens a photography studio in San Francisco, CA, on west side of Montgomery st between Washington and Jackson sts; this was variously advertised as “over the Pacific Baths” and in July, “Opposite Delmonico’s” and in September “271 Montgomery st, upstairs”
1851 May 04
Bradley’s first studio burns down and he opens a new studio within two weeks over Jack’s and Blake’s Jewelry Store, opposite the post office on Clay Street; also begins selling photographic materials; He advertises his location from June 19 through August as “Moffats Building, opposite post office” and in January, 1852 as”Clay st corner of Kearney”
1851
John B Cameron and William Herman Rulofson were in partnership as Rulofson & Cameron in Sonora. They conducted business in a car.
1853
Bradley establishes a branch studio in Sacramento, CA, at 68 and 70 ”I“ street, between Third and Fourth streets
1856
Bradley wins prize for photography at California State Fair
1857 January 18
Rulofson buys Cameron's remaining interest in the Sonora gallery.

1858
Bradley closes his gallery at the corner of Clay and Kerney
1859 Sep 21
Wilmington, NC, Bradley marries Betsy Euphemia Cutlar
1861
Bradley moves his wholesale photograph materials business to 622 Clay, San Francisco, CA
1861 or 1863
Rulofson leases out his Sonora Gallery gallery and moves to moves to San Francisco, CA
1863
Bradley and Rulofson join forces in San Francisco, CA, buying out the portrait gallery of daguerreotypist Robert H Vance to establish the photographic art gallery of Bradley & Rulofson at 429 Montgomery st, San Francisco, CA
1864
Bradley and Rolofson win the contract to photograph San Francisco’s defense facilities at Fort Alcatraz and Fort Point; the pair became embroiled in a dispute and resulting scandal in which they were accused of being Confederate spies because they claimed ownership to the nearly 2000 negatives and sold prints in their gallery; the military seized the negatives citing violation of War Department orders against publishing photographs of military installations; the negatives were returned after settlement of the dispute


1878
after bankruptcy, Bradley retires, his interest in the Bradley-Rulofson partnership had been assigned to John H Dall and the studio continues in San Francisco, CA. Still under the name Bradley and Rolofson
1878
the Gallery issues a Celebrity Catalogue listing their inventory which ran 51 pages
1878 Nov 02
William Rulofson died after falling from the roof of the Bradley & Rulofson studio in San Francisco. According to a report by The New York Times, he was heard to have exclaimed, "I am killed" during the descent
1878
Bradley closes his wholesale photographic supply business and retires
1878-1883
studio continues operation as Bradley and Rulofson, managed by Dall and a staff of photographers
1883
Bradley and Rulofson Studio operates under Dall’s sole ownership but at several locations
1887
the studio closes
1891 Apr 27
Alameda, CA, Bradley dies at home suffering from crippling rheumatism; he was 77

The cabinet card at the top was probably done between 1878 and 1887 when it was operated by Dall and a staff and changed locations often.

Go to the CABINET CARD GALLERY site for more excellent examples of Bradly and Rulofson. 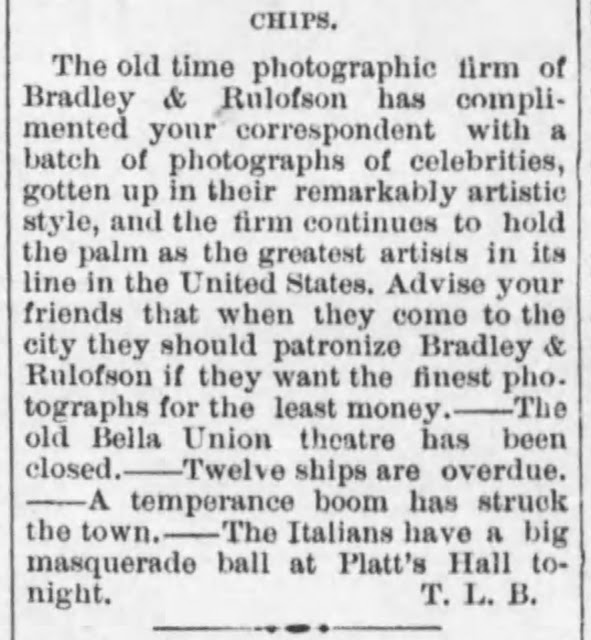 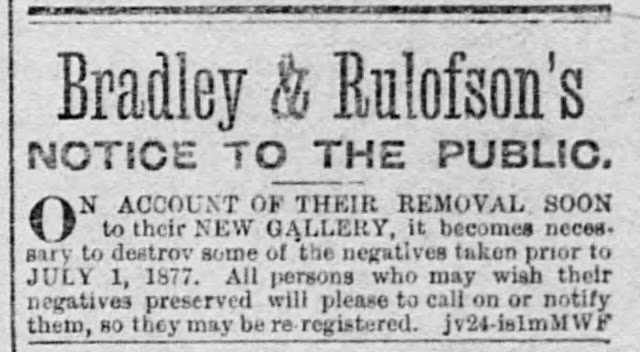 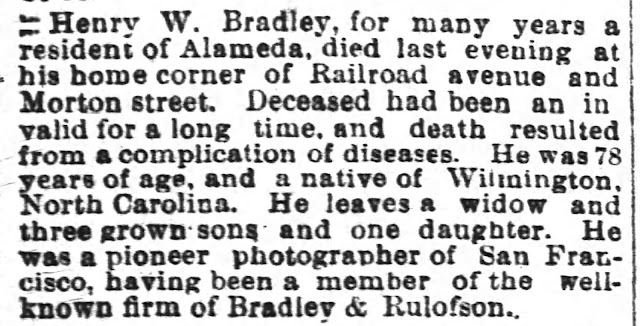 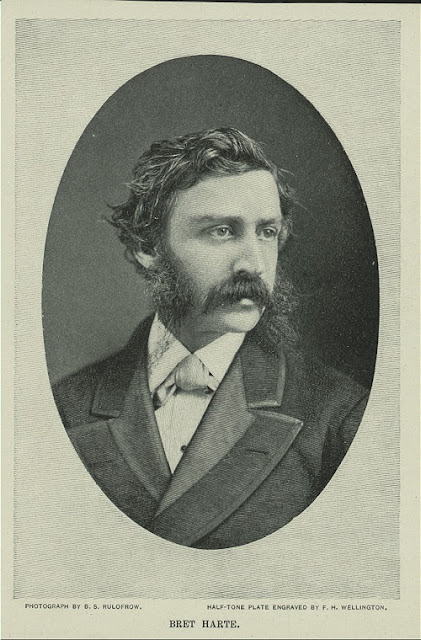 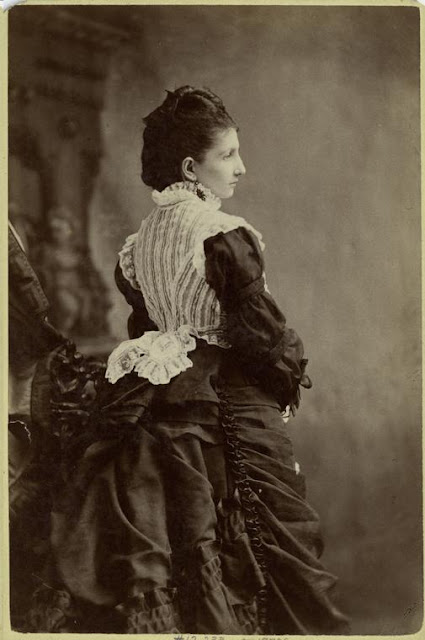 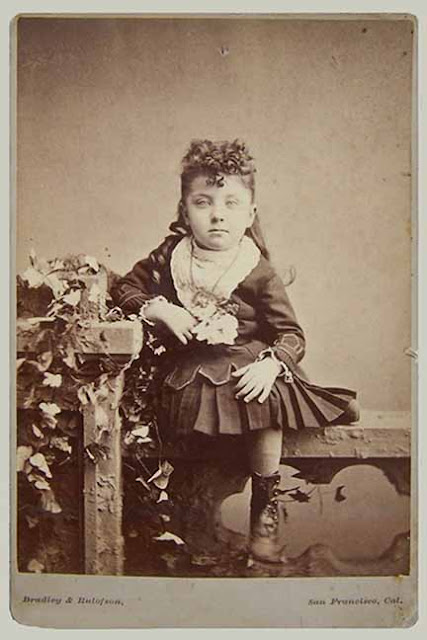 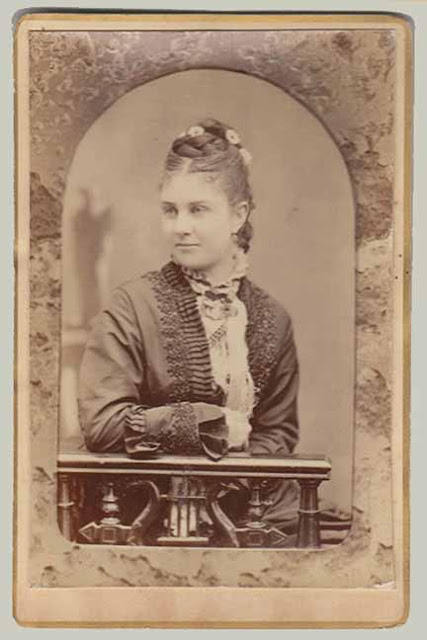 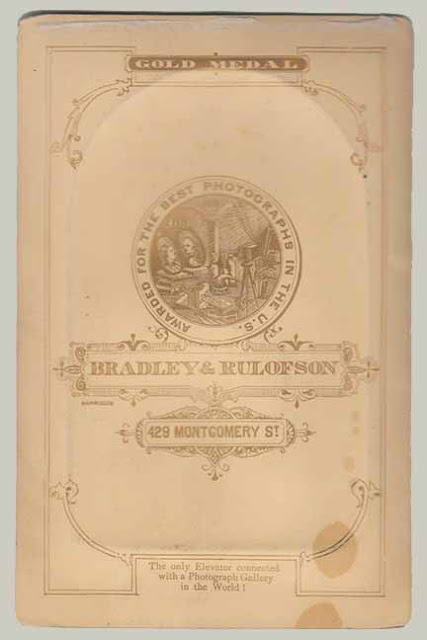 reverse of card at left
Finished sometime after 1863 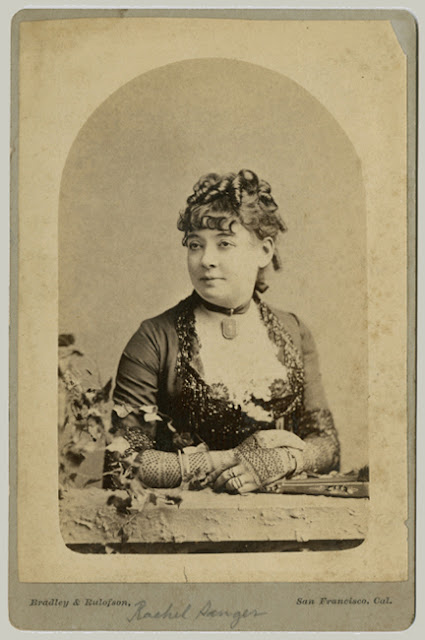 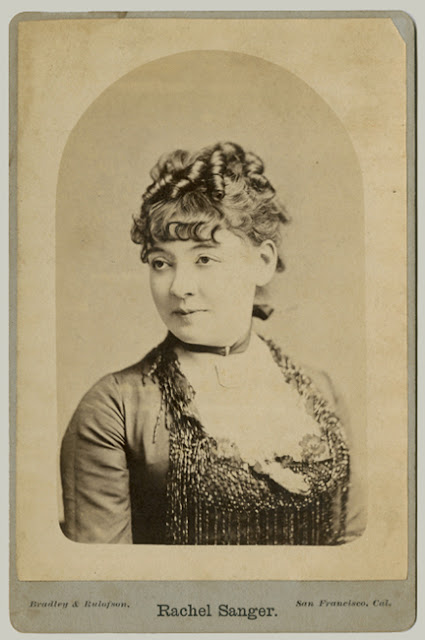 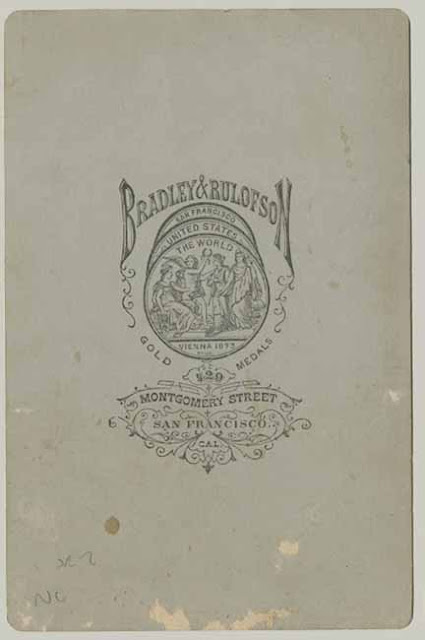 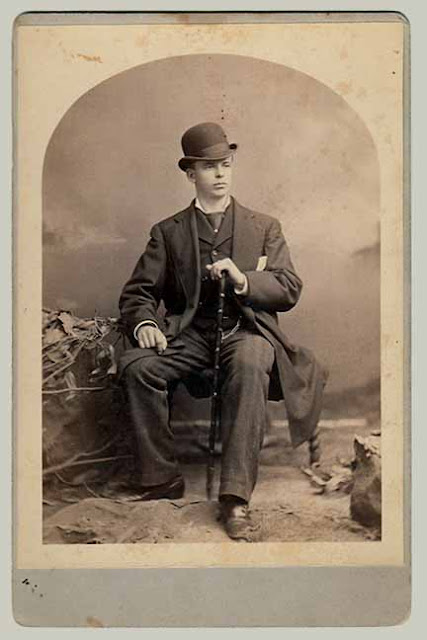 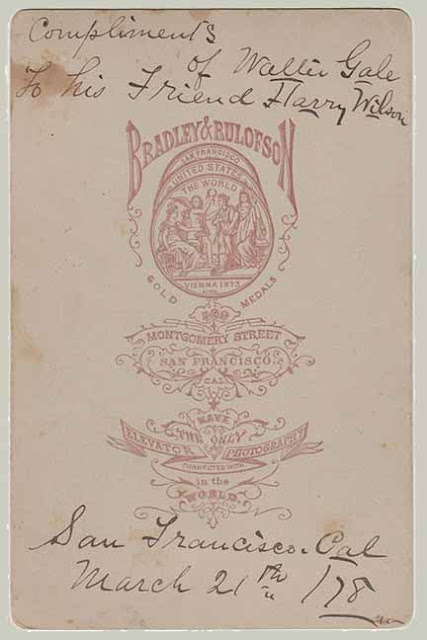 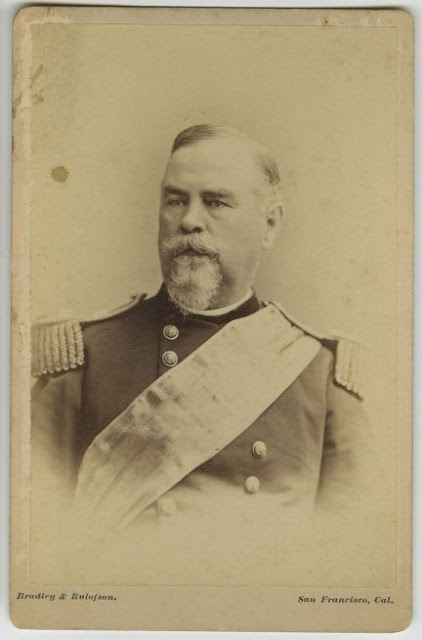 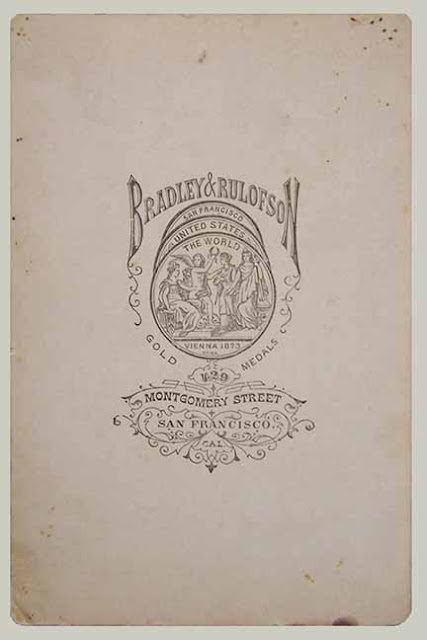 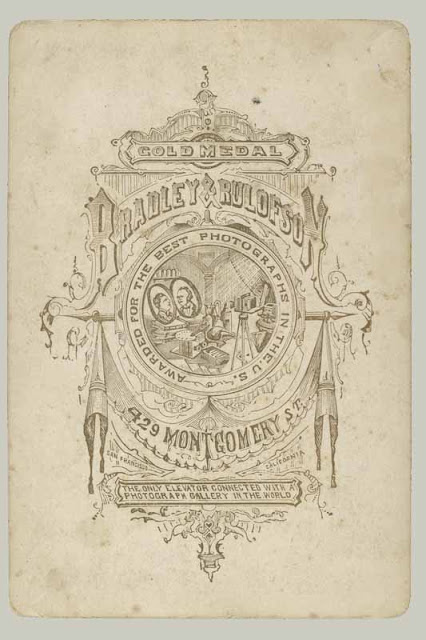 photographer: Bradley and Rulofson
backing probably from after 1873 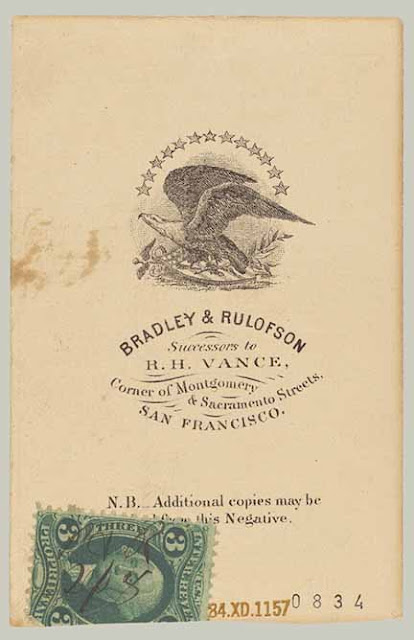 photographer: Bradley and Rulofson
CDV back
imprint probably used around 1864 or after 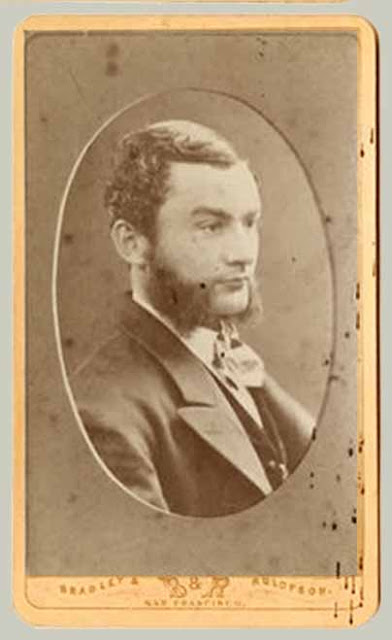 photographer: Bradley and Rulofson
CDV example from Marshall on facebook 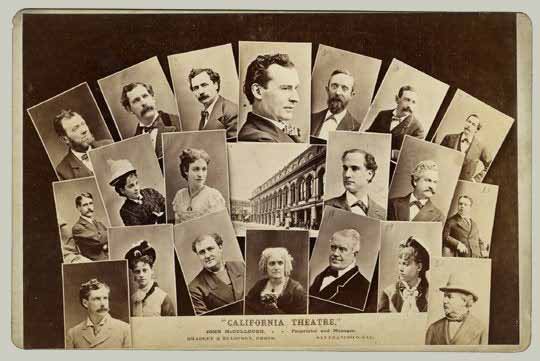 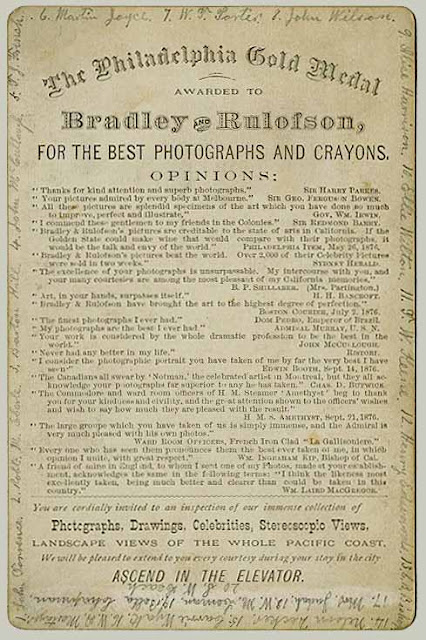