M. W. Wade (Madison Wright Wade) lived from 1866 to 1943. Wade developed his interest in photography while attending college at Ohio Northern University. The first recorded instance of Wade as a photographer was under the employ of Chas. T. Pomeroy in Kansas City, MO in the 1890’s. Wade was most well-known for inventing the “Ping Pong” in 1897. A photographic technique whereby the photographer would print multiple small images of a subject and print them on a single strip of photo paper.

Following his employment with Chas. T. Pomeroy, Wade opened his first studio in Leavenworth, Kansas and then in Denver, Colorado. In 1901, Wade moved to Ohio and opened five galleries. Of these, the main gallery was located in Akron on 207 E. Market St. Two were opened in Columbus, and one was opened in Canton and one in Massilon.

In 1904 Wade closed down all his galleries, moved to Youngstown, Ohio and opened a single studio named “Wade’s Studio”. He practiced his profession in Youngstown for the next 35 years until retiring in 1939. Wade was a regular speaker at photograph conventions across the country many times speaking on how to photograph babies which was one of his specialties. At one time he was crowned the best baby photographer in the United States by delegates at a national photographic association convention. 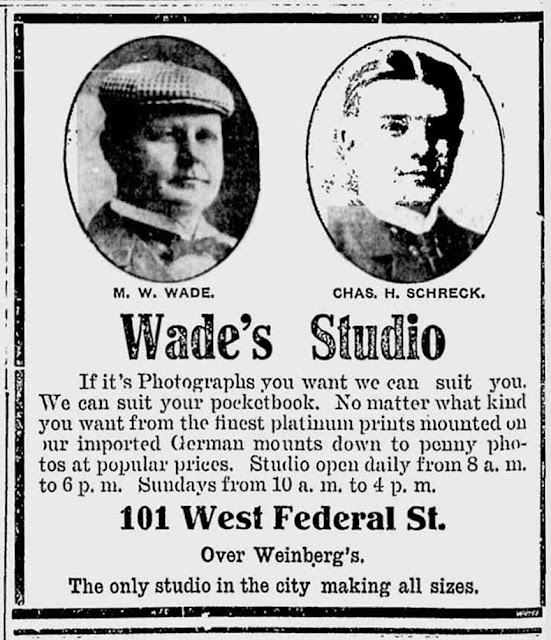